What is arc welding?

Electrode arc welding is the most widely used welding method in industrial production. The metal to be welded is one pole, and the electrode is the other pole. When the two poles are close to each other, an arc is generated. The heat generated by arc discharge (commonly known as arc combustion) is used to connect the electrode with the workpieces melt each other and form a weld after condensing, so as to obtain a welding process with a strong joint. 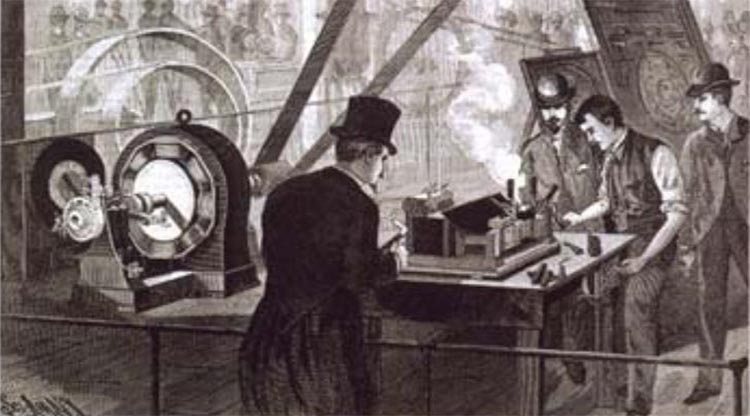 After many welding experiments as early as the 19th century, an Englishman named Willard first obtained a patent for arc welding in 1865. He used electric current to pass through two small iron pieces to successfully fuse them, and in about twenty years later, a Russian named Bernard obtained a patent for an arc welding process. He maintained an arc between the carbon pole and the workpieces. When the arc was manually operated through the joint of the workpieces, the workpieces to be welded was fused together. In the 1890s, solid metal was developed as an electrode, which was consumed in the molten pool and became part of the weld metal. However, oxygen and nitrogen in the air formed harmful oxides and nitrides in the weld metal. , Thus leading to poor welding quality.

In the early 20th century, the importance of protecting the arc to avoid air infiltration has been realized, and the use of arc heat to decompose the coating into the electrode of the protective gas shield became the best method. In the mid-1920s, the coated electrode was developed, which greatly improved the quality of the welded metal. At the same time, it may also be the most important transformation of arc welding. The main equipment in the welding process includes electric welding machine, welding tongs and face mask. 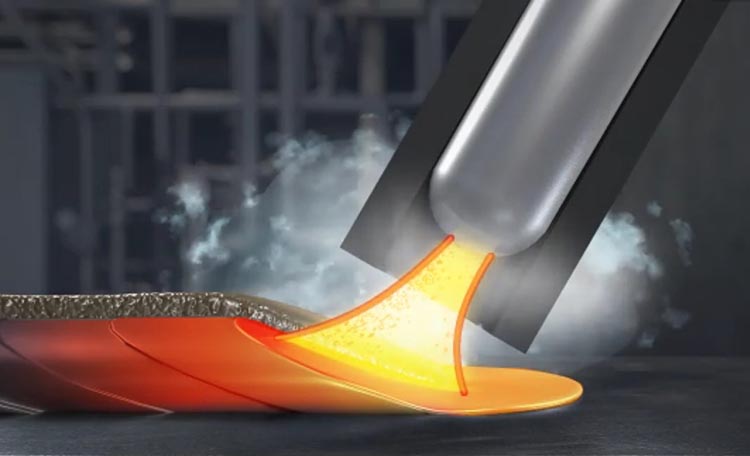 The welding arc is powered by the welding power source. Under the action of a certain voltage, a strong and long-lasting discharge phenomenon occurs between the electrode (and the end of the welding wire or the welding rod) and the workpiece. The essence of welding arc is gas conduction, that is, the neutral gas in the space where the arc is located is decomposed into positively charged positive ions and negatively charged electrons under the action of a certain voltage, which is called ionization. These two charged particles are directed to the two poles. Directional movement makes the local gas conduct electricity to form an arc. The electric arc converts electrical energy into heat, which heats and melts the metal to form a welded joint.

After the arc is induced to “ignite”, the discharge process itself can produce the charged particles needed to sustain the discharge, which is a self-sustained discharge phenomenon. And the arc discharge process has low voltage, high current, high temperature and strong luminescence. With this process, electrical energy is converted into heat, mechanical and light energy. Welding mainly uses its thermal and mechanical energy to achieve the purpose of connecting metals.

Shielded metal arc welding uses the electrode and the workpiece as two electrodes, and the heat and blowing force of the arc are used to locally melt the workpiece during welding. At the same time, under the action of the arc heat, the end of the electrode is melted to form a droplet, and the workpiece is partially melted to form an oval pit filled with liquid metal. The molten liquid metal and the droplet of the workpiece form a molten pool. During the welding process, the coating and non-metal are the inclusions dissolve each other and form a non-metallic substance covering the surface of the weld through chemical changes called slag. As the arc moves, the molten pool cools and solidifies to form a weld. We have various welding electrode for SMAW, most popular models are E6010, E6011, E6013, E7016, E7018, and for stainless steel, cast iron, hard surfacing etc. 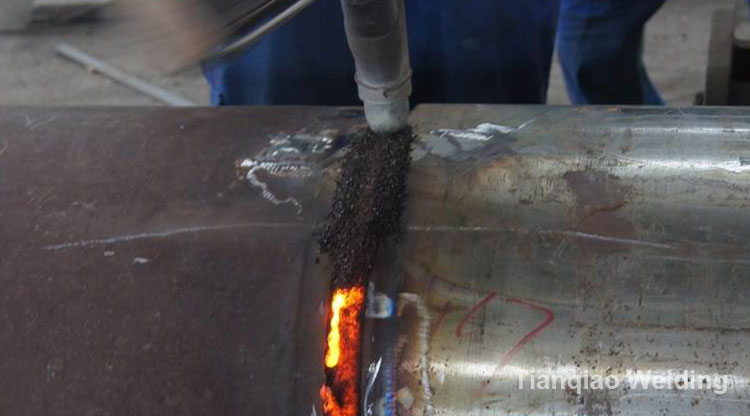 Submerged arc welding is a method in which the arc burns under the flux layer for welding. The metal electrode used in submerged arc welding is a bare wire that is automatically fed in without interruption. Generally, a welding trolley or other mechanical and electrical devices are used to realize the automatic movement of the arc during the welding process. The arc of submerged arc welding burns under the granular flux. The heat of the arc melts and evaporates the parts directly acted on by the arc of the workpiece, the end of the welding wire and the flux, and the vapor of the metal and flux evaporates to form a closed cavity around the arc. Burn in this cavity. The cavity is surrounded by a slag film composed of slag produced by the flux melting. This slag film not only well isolates the air from contact with the arc and the molten pool, but also prevents the arc from radiating out. The welding wire heated and melted by the arc falls in the form of droplets and mixes with the molten workpiece metal to form a molten pool. The less dense slag floats on the molten pool. In addition to the mechanical isolation and protection of the molten pool metal, the molten slag also undergoes a metallurgical reaction with the molten pool metal during the welding process, thereby affecting the chemical composition of the weld metal. The arc moves forward, and the molten pool metal gradually cools down and crystallizes to form a weld. After the molten slag floating on the upper part of the molten pool cools, a slag crust is formed to continue to protect the weld at high temperature and prevent it from being oxidized. We provide the flux for SAW, SJ101, SJ301, SJ302 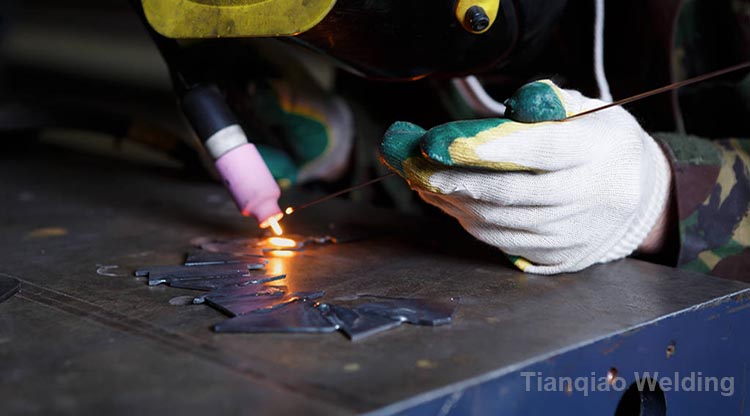 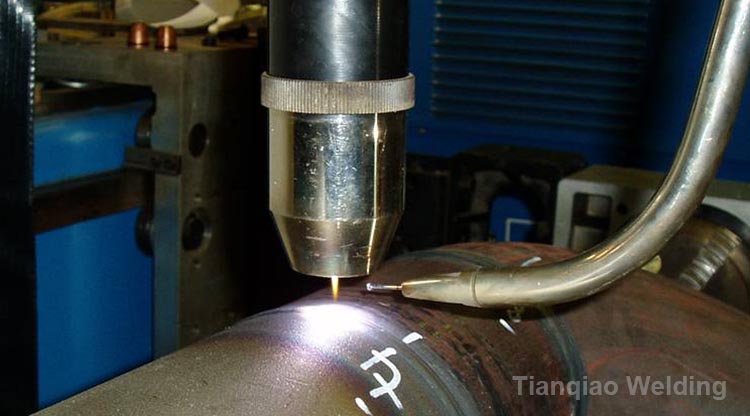 Plasma arc is a special form of arc. The arc is also tungsten or tungsten alloy (thorium tungsten, cerium tungsten, etc.) as the arc electrode, using argon as the protective gas, but the tungsten electrode does not extend out of the nozzle, but retract Inside the nozzle, the nozzle is water-cooled, also known as water-cooled nozzle. The inert gas is divided into two parts, one part is the gas ejected between the tungsten electrode and the water-cooled nozzle, called ion gas; the other part is the gas ejected between the water-cooled nozzle and the protective gas hood, called Shielding gas, using plasma arc as a heat source for welding, cutting, spraying, surfacing, etc. 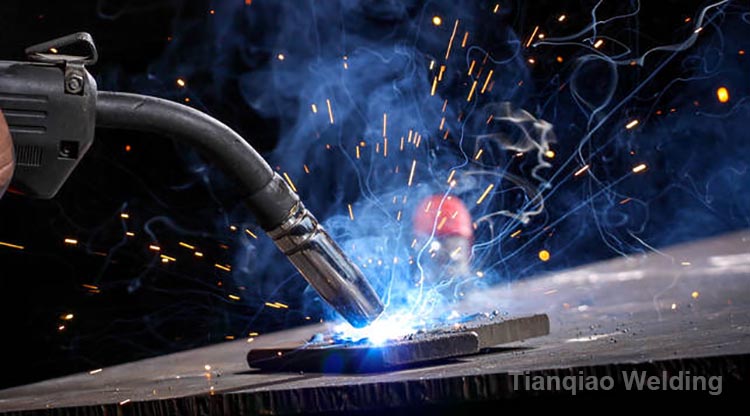 MIG welding means that the welding wire replaces the tungsten electrode. The welding wire itself is one of the poles of the arc, playing the role of electric conduction and arcing, and at the same time as the filling material, which is continuously melted and filled into the weld under the action of the arc. The protective gas commonly used around the arc can be the inert gas Ar, the active gas CO2, or the Ar+CO2 mixed gas. MIG welding that uses Ar as shielding gas is called MIG welding; MIG welding that uses CO2 as shielding gas is called CO2 welding. The most popular MIG are AWS ER70S-6, ER80S-G.